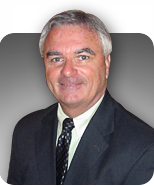 Mr. Bligh began his career in sales and management positions in the pharmaceutical industry, after first receiving a B.S. Degree in Biology from Cornell University.    He later earned his M.B.A. Degree from New York University.  His 25+ years in the optical industry began with Revlon VisionCare, where he served in numerous roles including Director of Worldwide Training and Development and General Manager of a business division.  Mr. Bligh subsequently headed North American sales for a division of Essilor, and later become General Manager for the optical division of Revo Sunglasses.

Mr. Bligh was an original member of the senior management team of Specialty UltraVision as Vice President of Sales and Marketing, and led the launch of the first disposable aspheric contact lens, now a standard of care in the industry.  He later served as COO of their North American business.  Mr. Bligh was also a founder of Optical Connection, Inc. (OCI), and WaveTouch Technologies, whose businesses were based on advanced aberration control designs, and fully individualized wavefront guided contact lenses.

Mr. Bligh has worked with numerous clients in establishing strategic partnerships for development of business relationships and fundraising activities to help optimize their business. He also works closely with numerous emerging new technologies in the ophthalmic space.